Skip to content
You are here: Adkins History > The Little Book Of Egyptian Hieroglyphs

This book was published in hardback in 2001 by Hodder & Stoughton and in paperback in 2002. It is on sale in all English-speaking countries except, unfortunately, the US. It is also published in the Netherlands (by Kosmos-Z&K) as Hiërogliefen, in Sweden (by Wahlström & Widstrand) as Tyda Läsa Skriva Egyptiska Hieroglyfer, and in Finland as Hieroglyfikirja (by Atena).

Reason for the Book

On first visiting Egypt a few years ago, we really wanted a quick and easy way of learning hieroglyphs so that we could enjoy our visit to the ancient monuments even more. We later embarked on writing The Keys of Egypt, the incredible story of the struggle to decipher Egyptian hieroglyphs and the rediscovery of ancient Egypt. We managed to teach ourselves hieroglyphs, but it was not an easy task, as the available books were either very scholarly, out-of-date or far too simplistic. We have tried to fill that gap by writing a book that will give enough information for anyone visiting Egypt or just wanting to have fun with hieroglyphs. Always a popular subject with people of all ages, Egyptian hieroglyphs are a constant source of amazement – so beautiful and yet so mysterious. For over 4,000 years the picturesque and mystical signs were used by scribes to write letters, accounts, poems, magic spells, curses and even graffiti. Often carefully carved and painted in bright colours on the walls of tombs and temples in Egypt, hieroglyphs hold a particular fascination because many of them are recognisable as accurate if simple pictures of animals, people and objects. The Little Book of Egyptian Hieroglyphs gives clear and simple explanations of the different types of signs, so that you can immediately begin to read, write and enjoy hieroglyphs. It also explains how the hieroglyphic writing system works, avoiding the specialist jargon of Egyptologists. With numerous examples of hieroglyphs and easy-to-identify pictures of gods and goddesses, this book is essential to anyone wanting to know about Egyptian writing – and will show how anyone from Adrian to Zoe can write their own name in hieroglyphs! 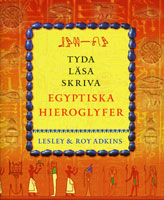 Hieroglyphs, the writing of ancient Egypt, have been around for thousands of years. They are fascinating to look at, because many of the signs are recognisable as pictures of…

parts of the body

while others seem at first glance positively strange.

Put together in rows and columns, these hieroglyphic symbols form an infinite variety of patterns that were an important part of ancient Egyptian art. Some can be written quite simply, while others are minor masterpieces in themselves, but these hieroglyphs were not just pictures – to those who could read them, they were a sophisticated system of writing used for accounts, historical records, stories, love poetry and, above all, magic spells. Today hieroglyphs are found in huge numbers carved and often painted in bright colours on the walls of temples and tombs in Egypt, as well as on many objects such as coffins, statues, papyri, pottery vessels, and mummy bandages in museums all over the world.

‘A small format book, it is designed for the absolute beginner. These two acknowledged masters of the subject will even teach you how to write your own name in hieroglyphs’ (Bookworm, Daily Mail)

‘The adjective “little” used in the book’s title and in a couple of chapter headings is a prime example of dumbing down … which doubtless some readers will find irritating – it was certainly a mistake for the authors to have chosen to adopt this patronising word, when they do make every effort to tackle the difficulties of ancient Egyptian … The authors … waste ten pages on how to spell modern first names in hieroglyphs. Knowing how to write “Kevin” or “Charlotte” is not going to enable anyone to get within light years of producing an intelligent decipherment of, say, a Middle Kingdom stela’ (George Hart, Egyptian Archaeology)

‘Lesley and Roy Adkins have written a number of books on ancient history and have managed the remarkable task of condensing the subject of hieroglyphs into a pocket size publication. The end result is a book that is factually fascinating and perfect for anyone who wants to dip their toe into the subject of Egyptology’ (Devon Today)

‘Have you ever wanted to know how to write your name in hieroglyphs? If so, The Little Book of Hieroglyphs by Lesley and Roy Adkins would be a good place to start. The text is very informative yet accessible and will enable you to read the signs of the hieroglyphic alphabet, understand numbers and counting, write your name using hieroglyphs, decipher the names of pharaohs, gods and goddesses, and translate common words and phrases from monuments and tombs’ (Nonesuch: The University of Bristol Magazine)

‘This little tome by Devonians Lesley and Roy Adkins gives clear and simple explanations so that you can immediately begin to read and enjoy hieroglyphs. It simply explains how the system works and even shows you how to write your own name in hieroglyphs’ (Devon Life)

‘I found myself enthralled from and beyond the acknowledgements page … The authors infect us with their own incredible enthusiasm, claiming Egypt and its hieroglyphs to be addictive. Indeed so … I am well and truly hooked!’ (Joan Stockdale, Bangor Chronicle)