Skip to content
You are here: Adkins History > Lesley Adkins 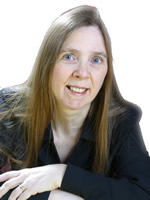 I was brought up and educated in Havant, Hampshire (as Lesley Smith), living right on the south coast of England. Bedhampton Infant School was followed by Bosmere Junior and then Havant Grammar School. Because I was fortunate in having the opportunity at Havant Grammar School to study Latin (in the days when it was seen as an essential subject), I in turn became fascinated by archaeology. As a result, I went to the University of Bristol, where I gained a Bachelor of Arts honours degree in Archaeology, Ancient History and Latin, and later on a Master of Philosophy degree from the University of Surrey.

At Bristol, I discovered the lure of field archaeology, initially spending many weeks of my vacation time on excavations in the city of Chichester in Sussex, with its wealth of Roman and Medieval remains. After Bristol, my first job was at Milton Keynes (where I met Roy), working as an assistant archaeologist on excavations in advance of building a new town. Like most jobs in archaeology then (and now), this was a temporary post and poorly paid, and Milton Keynes was a pretty desolate place at that time. Roy and I next moved to south London, where we worked together on the major excavation of a prehistoric settlement and Roman villa site at Beddington near Croydon.

By now we were employed as field archaeologists by the Museum of London, but changes were afoot. We therefore decided to take a huge risk and set up as freelance archaeological consultants in Somerset, undertaking archaeological assessments by documentary research and excavation, as well as providing expert evidence on archaeological matters for public inquiries. We also became involved in the editing, copy-editing and indexing of archaeology and history books, as well as writing our own books. We already had two books published and were working on a third when we moved to Somerset. Although we took on all sorts of archaeological work and were constantly busy doing up a derelict house, we kept on writing books at the same time, because that aspect of our work gave the most satisfaction.

We also enjoyed taking groups on archaeological and historical tours within the UK, and became increasingly interested in photography, for a while running our own picture library.

The new millennium brought more changes, because we moved to Devon and began to write more-or-less full-time. Our latest book to be published is called When There Were Birds: The forgotten history of our connections. Our previous books include Gibraltar: The Greatest Siege in British History, Eavesdropping on Jane Austen’s England (Jane Austen’s England in the US) and Jack Tar: Life in Nelson’s Navy, which was published in paperback as Jack Tar: The extraordinary lives of ordinary seamen in Nelson’s navy.