Skip to content
You are here: Adkins History > Our Other Books

We have been writing archaeology and history books for many years. We have given separate pages on this website to our more recent books, Eavesdropping on Jane Austen’s England, Jack Tar, The Handbook of British Archaeology, The War for All the Oceans, Trafalgar, Empires of the Plain, The Keys of Egypt and The Little Book of Egyptian Hieroglyphs. The following section gives information on all our other books, many of which are still in print, while others can be obtained secondhand or through your local library service.

Handbook to Life in Ancient Rome

This reference book provides comprehensive access to over 1,000 years of Roman rule, dealing with the archaeology and ancient history of Rome and its empire from the 8th century BC to the 5th century AD. [Click on the title for more information]

Handbook to Life in Ancient Greece

This reference book provides comprehensive access to over three millennia of ancient Greek history and archaeology. [Click on the title for more information]

Over 1,400 entries and 120 of our own line drawings and photographs relating to all aspects of the ancient Roman religion. [Click on the title for more information]

Introduction to the Romans

Published as a colour illustrated hardback in 1991 by The Apple Press, this book has also appeared under other imprints, including The Burlington Press, Eagle Editions and Grange Books. As its title suggests, it is an ideal starting point for those wanting to get to know the Roman world, and many of the colour photographs were taken by ourselves. Out of all our books, it is the one most often borrowed in public libraries! It is also available in Spanish as El Imperio Romano: Historia, cultura y arte, in French as Les romains: culture et mythes and in German as Die Römer: Kultur und Mythen.

“it is like having a complete series of Adult Education lectures in one volume!” (Mike Curtis, Yesterday’s World)

A Field Guide to Somerset Archaeology

This guidebook with its rather stuffy title (not ours!) was published in 1992 by The Dovecote Press. It is an illustrated guide to the prehistoric, Roman and medieval sites of the county of Somerset in south-west England, with directions, car parking, factual descriptions, opening times, and information on access for disabled visitors. We visited each site personally, which was an excellent way to get to know the county.

Tom Mayberry in the Proceedings of the Somerset Archaeology and Natural History Society said: ‘Anyone familiar with the work of Lesley and Roy Adkins will not be surprised by the high quality of both text and illustrations … The book is concise, reliable and accessible, and is illustrated with some excellent figures and photographs. It is likely to become a source of immediate reference to those who already know something of the county’s archaeology, and a source of inspiration to those wanting to discover more’. S V E Heal in the Exmoor Review said: ‘This Guide meets the important criteria of lucidity, portability and reasonable affordability. It has numerous pleasing figures and useful maps and plans, a variety of lists by period and site type and – invaluable in these parts – a list of wet weather visits.’ 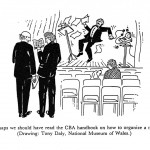 Talking Archaeology: A Handbook for Lecturers and Organisers

This is a small publication issued by the Council for British Archaeology in 1990. We wrote it after attending many badly organised conferences and lectures where the speaker was ill-prepared! The highlight of the publication must surely be the ten cartoons by Bill Tidy. ‘Whilst this new CBA practical handbook aimed at a broad readership will not, I am sure, bring to an end every disastrous occasion, it should help raise standards if organizers and speakers alike read it … The final comment should be kept for Bill Tidy whose excellent cartoons have brought a sense of humour to this helpful handbook, and which, I hope, will encourage people to read it’ (Richard J Brewer, Post-Medieval Archaeology). This same review in Post-Medieval Archaeology was also illustrated by a cartoon drawn by Tom Daly of the National Museum of Wales.

This was published as a colour illustrated hardback in 1990 by The Apple Press, but has also appeared under other imprints, including Grange Books. Each chapter deals with the different reasons why prehistoric and historic sites were abandoned – such as through warfare or natural disaster.

An Introduction to Archaeology

Originally published as a colour illustrated hardback in 1989 by The Apple Press, this has also appeared under other imprints such as The Burlington Press and more recently Grange Books. We were initially horrified that the publishers gave us just four weeks to write the book, but we managed to complete it in the allotted time, basing it on a series of adult education classes we had fortuitously just given. The book has become very popular as a starting point for students in archaeology, and it is borrowed widely in public libraries. Many of the colour photographs were taken by ourselves.

This book was published in hardback in 1989 by Cambridge University Press in the Cambridge Manuals in Archaeology series. We decided to write the book because of the low standard of illustrations published in many archaeological journals and books, and each chapter deals with a different aspect such as recording buildings, drawing on site, drawing artefacts, and drawing for publication. Always fiendishly expensive, particularly considering that archaeological illustrators are generally poorly paid, the book was never made available in paperback and was out-of-print for a while, with secondhand copies virtually impossible to obtain. CUP has now (twenty years on) reissued the book as a paperback. It has not been updated, but still contains much that will be of value to illustrators.

Under the Sludge. Beddington Roman Villa

This was a 92-page illustrated book published in 1986 by the Beddington, Carshalton and Wallington Archaeological Society. The Beddington sewage works near Croydon was once operated by having sewage sludge spread over its many acres of farmland – hence the title of the book. Much of the land was redundant and its destruction threatened by gravel extraction in the early 1980s, and so we began a process of looking for the Roman bath-house which was known to exist on the site. With the help of many volunteer workers, a Roman villa complex was also found, as well as a prehistoric settlement. This ‘popular’ account of the rescue excavation was written primarily for the local people who took a keen interest in the project.

‘a fascinating and useful insight into the archaeological investigations of a Roman villa and prehistoric settlement … a very useful book and readable introduction to archaeological methodology and problems’ (David Rudling, London Archaeologist)

Neolithic Stone and Flint Axes from the River Thames

This A4 monograph was written by Roy Adkins with Dr Ralph Jackson of the British Museum and was published as the museum’s very first occasional paper (ISBN 0861590007). Numerous Neolithic axes, several thousand years old, have been found in the River Thames, quite often discovered through dredging. Some were deliberately deposited for ritual reasons, others were accidentally lost, and the purpose of this publication was to discuss these finds and give a catalogue, as well as scale drawings of all the axes. It has 64 pages of text and a further 84 pages of illustrations of the actual axes in museums.