Skip to content
You are here: Adkins History > Our Newsletters > Newsletter 60

Welcome to our latest occasional newsletter, for spring 2021, the Era of Vaccinations.

TOOLS OF THE TRADE

Historians have always used whatever forms of evidence were available to them. Early historians such as the ancient Greek Herodotus, who lived in the 5th century BC, had little material to work from. They often relied on lists of figures in power and regular events such as festivals to form a chronology. To this they added whatever they could find out about foreign people and places, as well as traditional mythologies and stories told by travellers and traders. By contrast, there is an incredible amount of material available today, and the selection below gives an idea what can be gleaned from fairly mundane sources.

The word ‘document’ is usually applied to something official, such as this legal tenancy agreement of 1802 from the Court Baron of the Manor of Stoke-sub-Hamdon in Somerset. The Court Baron was the manor court that dealt with land ownership and tenancies. 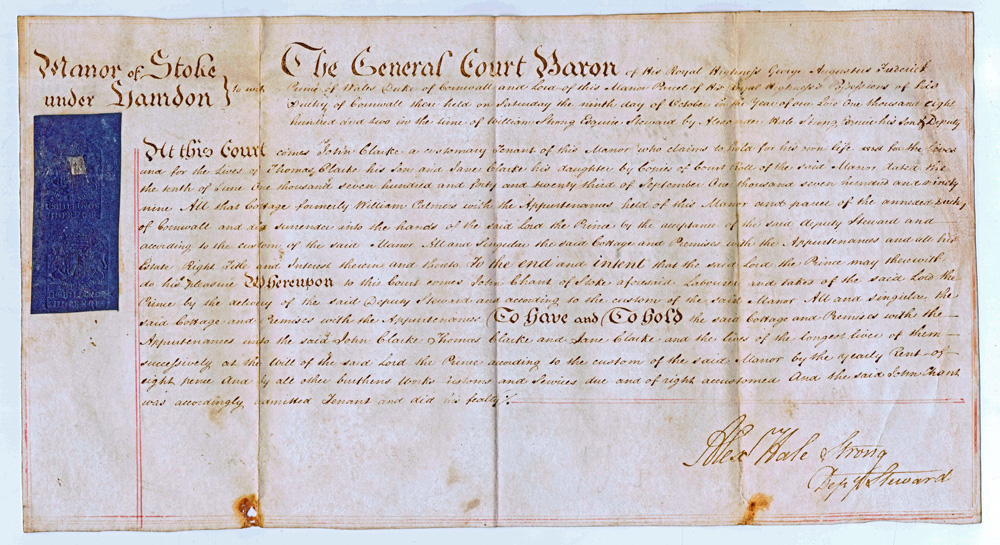 The agreement was handwritten on paper using a quill pen and ink. It recorded that John Chant was taking the tenancy of a cottage that belonged to John Clarke for his lifetime and that of his son and daughter, until the last one died. The overall landlord was the Duchy of Cornwall, and the blue rectangular strip is a Duchy of Cornwall tax stamp. 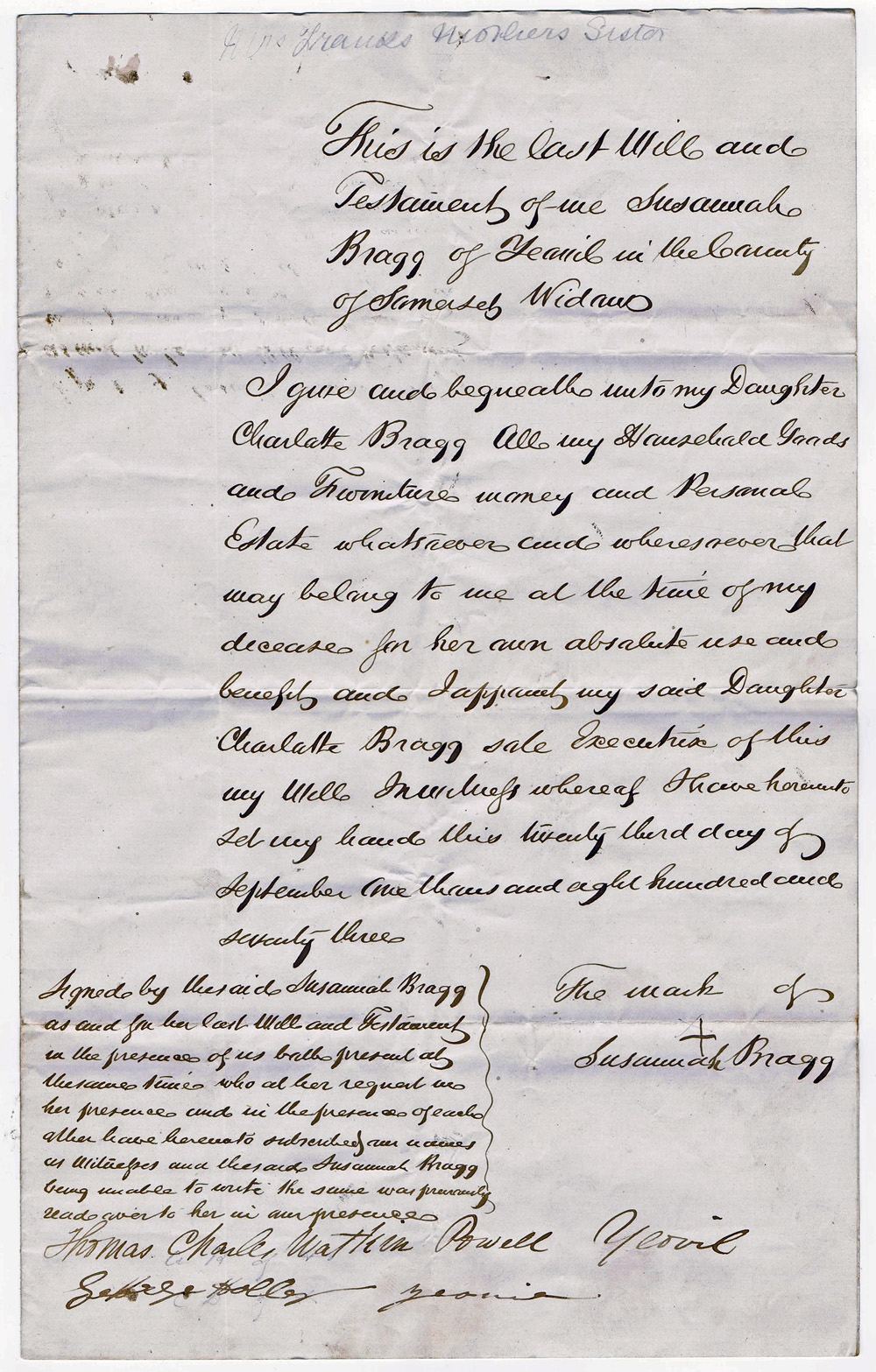 A will, or ‘Last Will and Testament’, bequeathing personal goods on death, is another official document that is always an invaluable tool, especially for anyone involved in family history. Apart from finding out how property and goods were shared out among friends, family and charities, wills often contain all kinds of information about the person writing the will and their family.

This is the will of a widow, Susannah Bragg, of Yeovil in Somerset, written in 1873, leaving everything to her daughter Charlotte Bragg. One interesting feature is that Susannah signed the will above her name with a cross as her mark, showing that she was unable to write.

Like the tenancy agreement, this will was handwritten on paper, though by this date a pen with a steel nib was probably used, rather than a quill pen.

The least obvious documents often prove to be the most fascinating. Tickets to museums, concerts, trains, buses and so on are ephemeral, as all too often they would be discarded on the day of use. This red ticket was for a ferry crossing and entrance to the Exeter Maritime Museum, which was based at Exeter Quay and partly housed in the Old Customs House. The museum was started in 1969 and moved to the nearby Haven Banks canal basin in the 1980s. The ticket appears to date to 1983, which fits in with the mention of V.A.T. From World War Two, the UK imposed a purchase tax on many luxury goods, levied from the manufacturer not the consumer, but on joining the European Economic Community in 1973, it was replaced by Value Added Tax, which was applied to all and sundry. 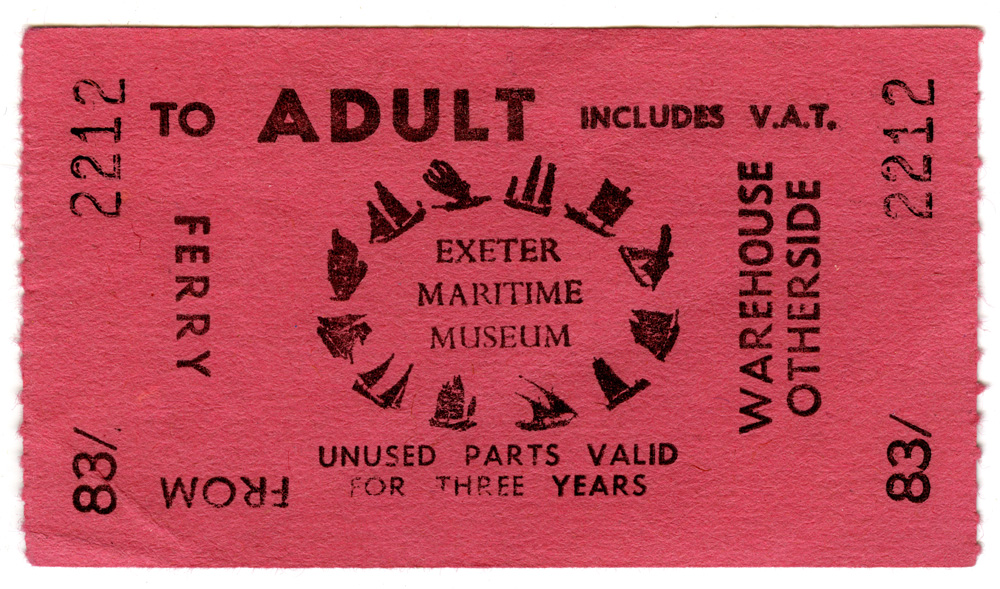 About this time, the museum ran into financial problems from the cost of repairs to the museum buildings. It finally closed in 1997, and the collection was tragically and shortsightedly dispersed. Exeter lost an incredible asset.

It is easy to forget that, without emails, texts and phone calls, communication for those who could read and write had to be done through letters or postcards, and personal letters between friends and relatives can provide really interesting information about the times the correspondents were living through. This is an 1833 letter to Mrs Joseph Egerton at Teignmouth in Devon, from her nephew Henry Cumming in Van Diemen’s Land (the first name that Europeans used for the Australian island of Tasmania). It  describes the conditions in that country and how he was progressing as a clerk in the Van Diemen’s Land Company. 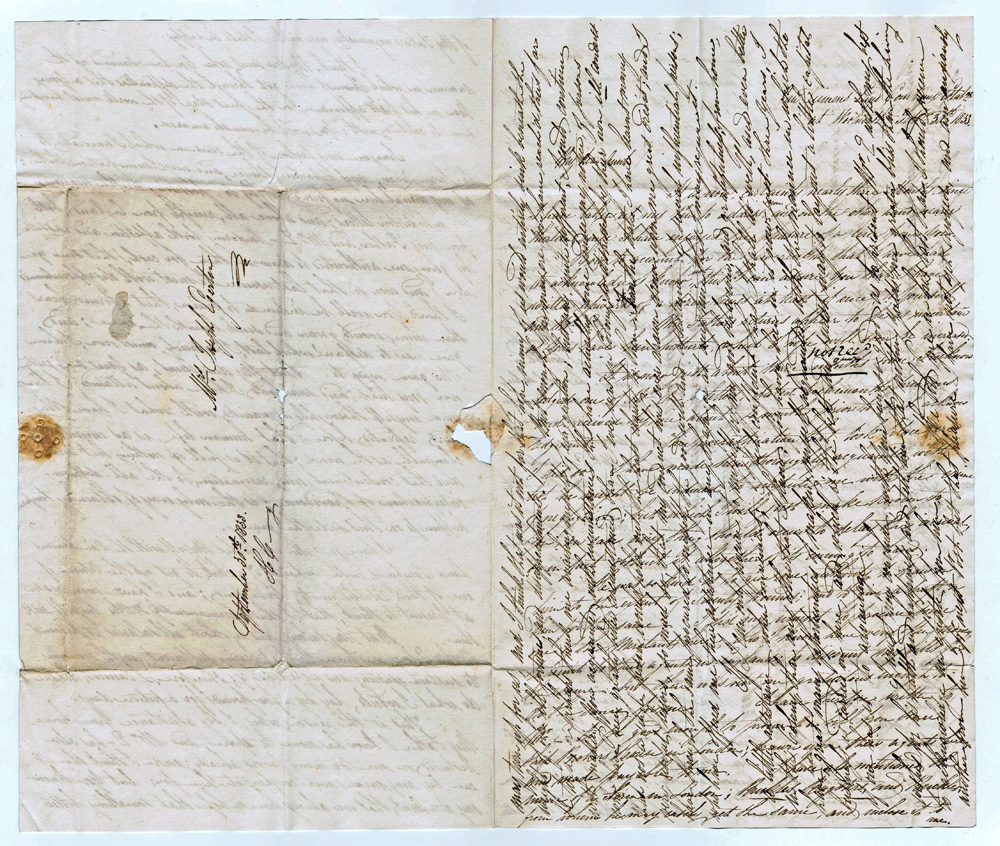 To cram as much information as possible into the letter, Henry Cumming wrote (with a quill pen and ink) at right-angles across the page that he has already filled. This was a common method of keeping to a single sheet of paper when there was an extra postage charge for additional sheets. On the left-hand side the creases can be clearly seen where the single sheet was folded up to hide the writing, and then sealed and posted without an envelope. The remains of the wax seal are visible as three stains (one is torn) across the middle of the sheet.

Maps are extremely useful, though the earliest ones tend to be highly pictorial, inaccurate and lacking in detail. They were of little use to travellers, and so road itineraries or road maps like this one became popular. They showed short sections of roads, relatively accurately, and included towns and villages, landmarks and places of interest on either side of the route. They were bound into books, often with text descriptions about parts of the route, so they could easily be used on a journey. This map shows a section of the Bath road from Newbury to Maidenhead. West is at the top of the page and east is at the bottom. 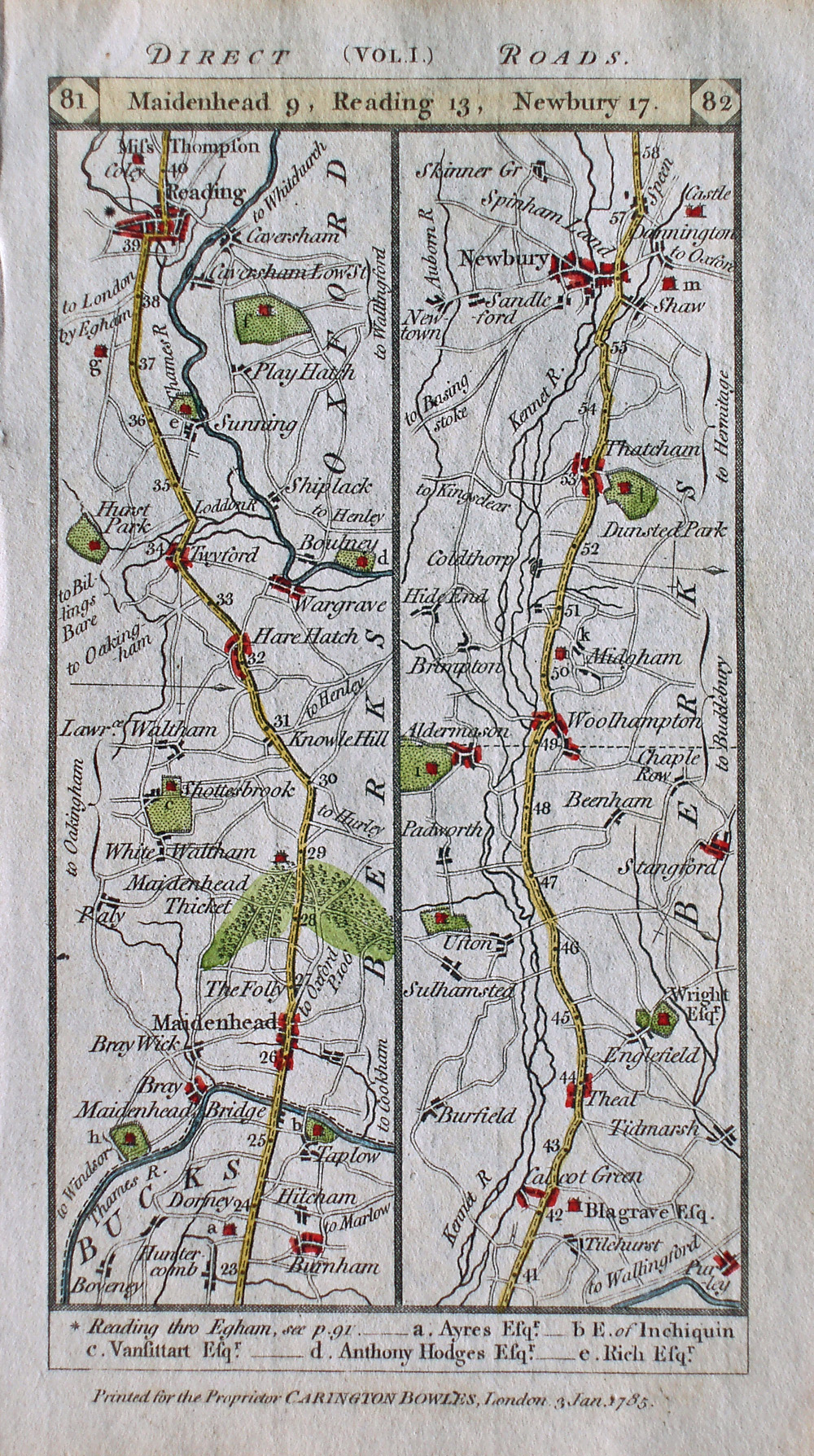 As with all historical sources, to mention photographs in a few words is merely to give a hint of the potential that can be unlocked, even if it is not possible to identify or firmly date the place, person or object. From the mid-19th century, photographs began to provide yet another record of everyday life. These two examples were taken at haymaking time between the two world wars. In the top image, farm hands and children are stacking hay, while the other one shows a finished haystack. 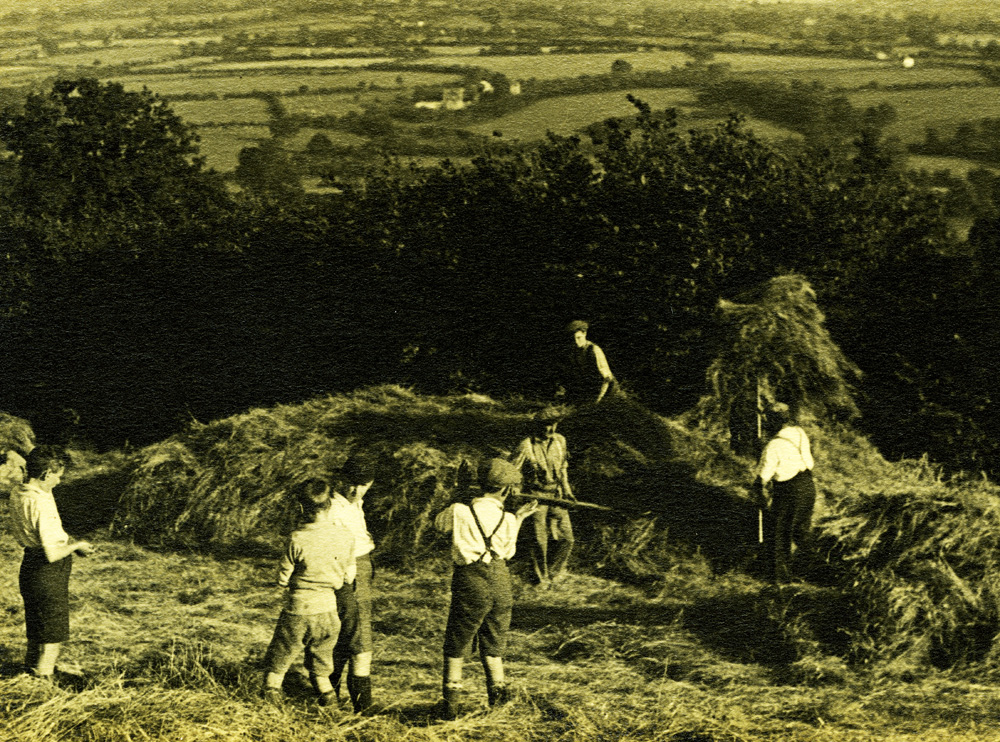 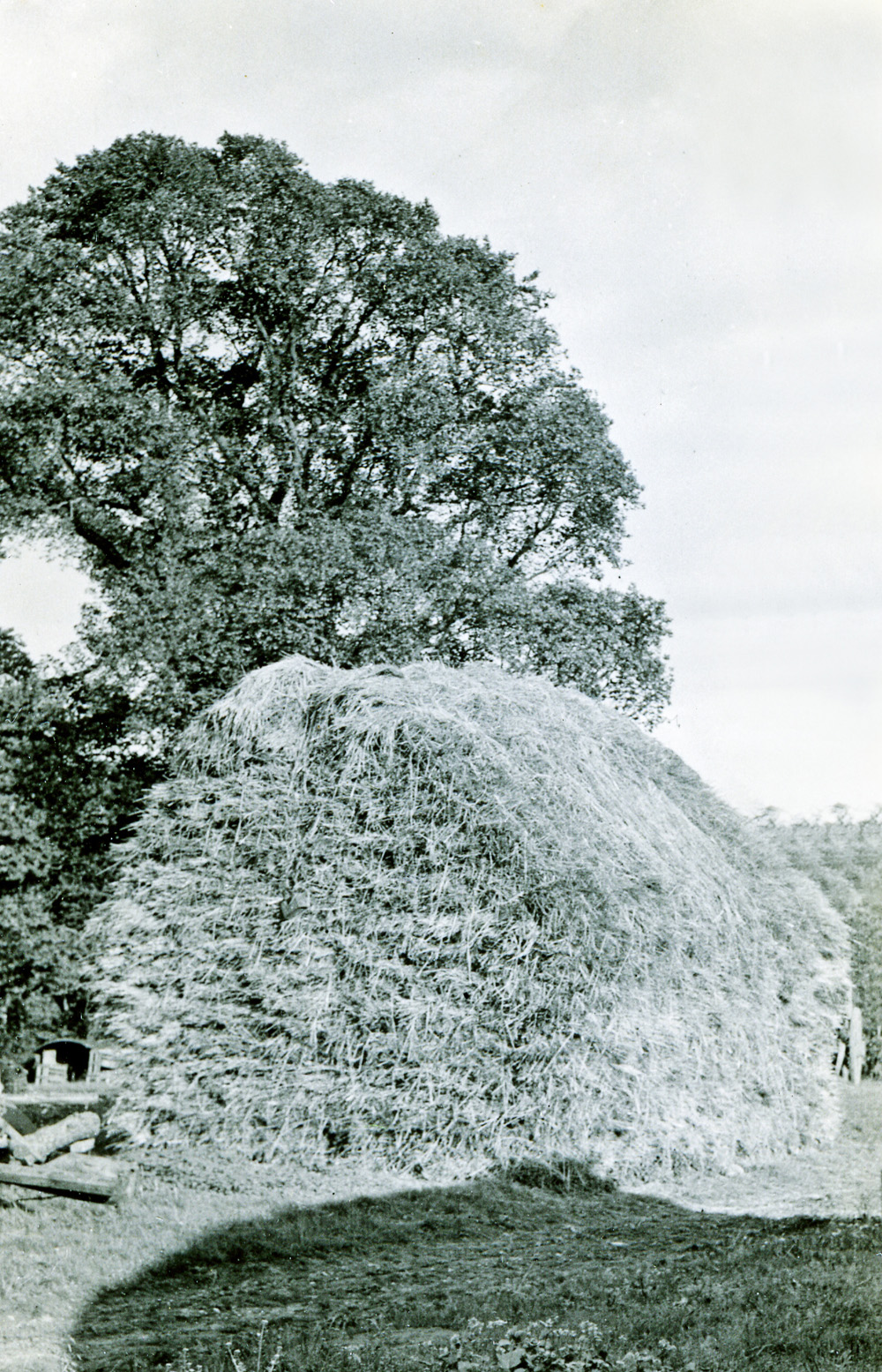 Signs in the landscape

We are surrounded by historical evidence from all periods, and this milestone is on the A361 road near Swerford in Oxfordshire. It shows that this section of road was once a turnpike. Horse riders and carriage and cart drivers had to pay a toll to use this road, which was part of the Banbury to Burford turnpike, set up in 1770. 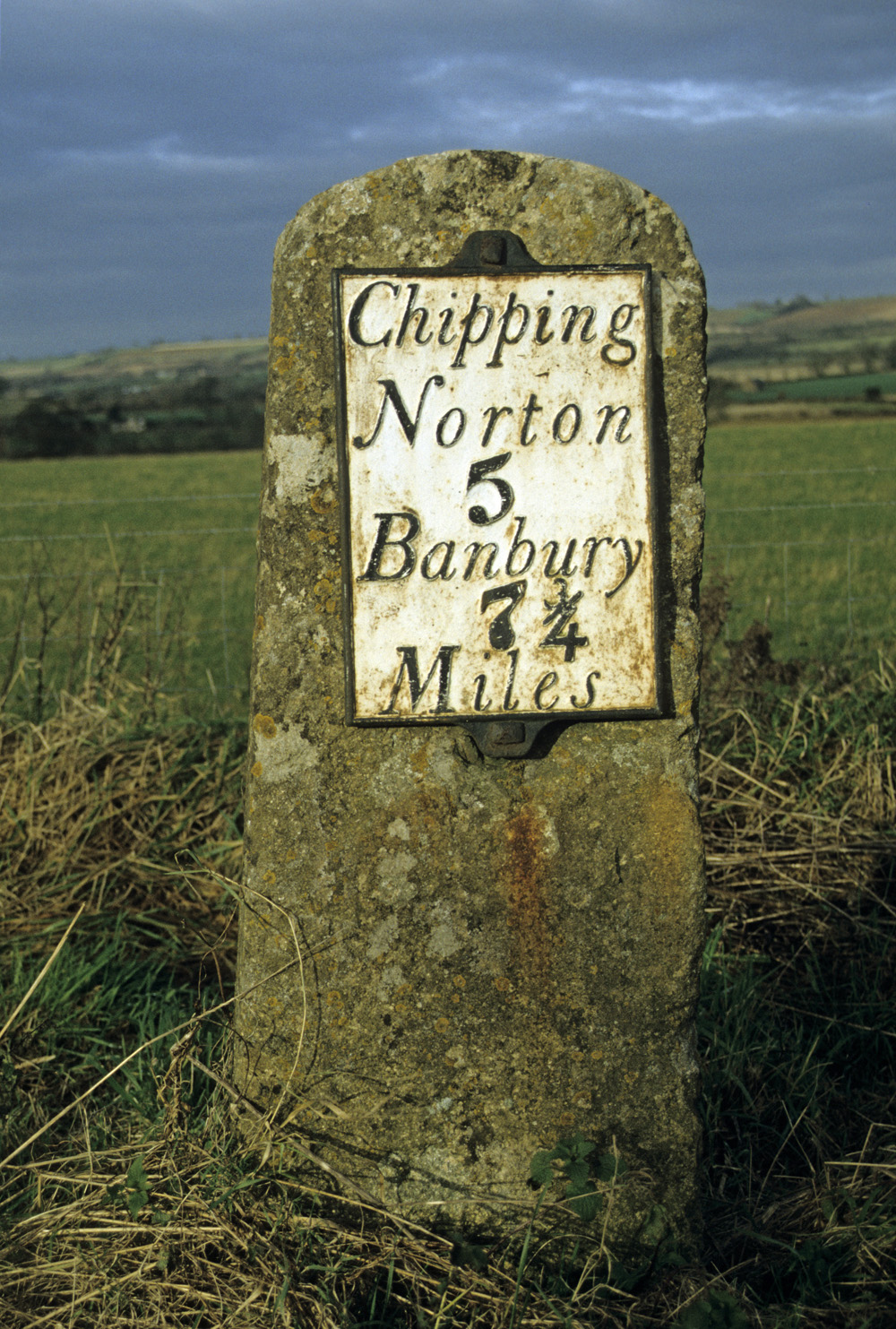 Gravestones can give fascinating glimpses into a past way of life, as with this one from the churchyard of St Mary’s Church in Cheltenham, Gloucestershire, which says that John Higgs, who died in 1825, was a pig killer and very good at his job. 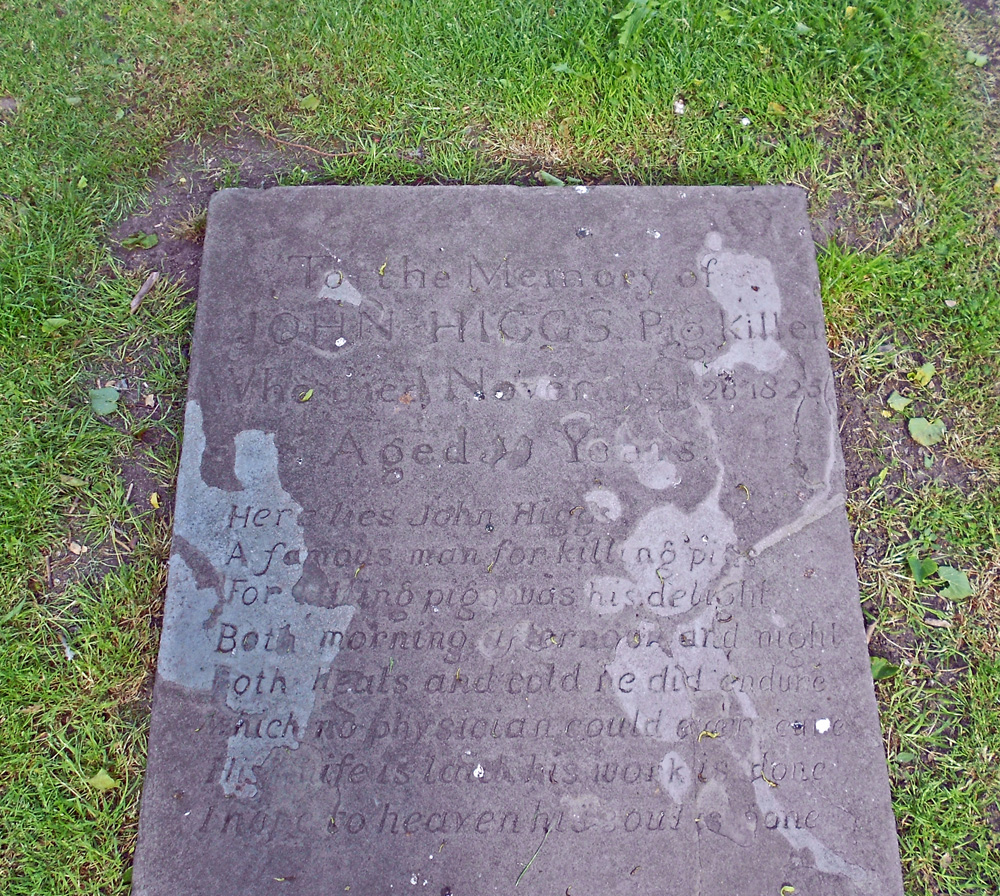 History can be found in some unusual places. The Powder Monkey pub in Exmouth, Devon, was given its name only a few years ago, after local people were consulted – a case of history reborn. 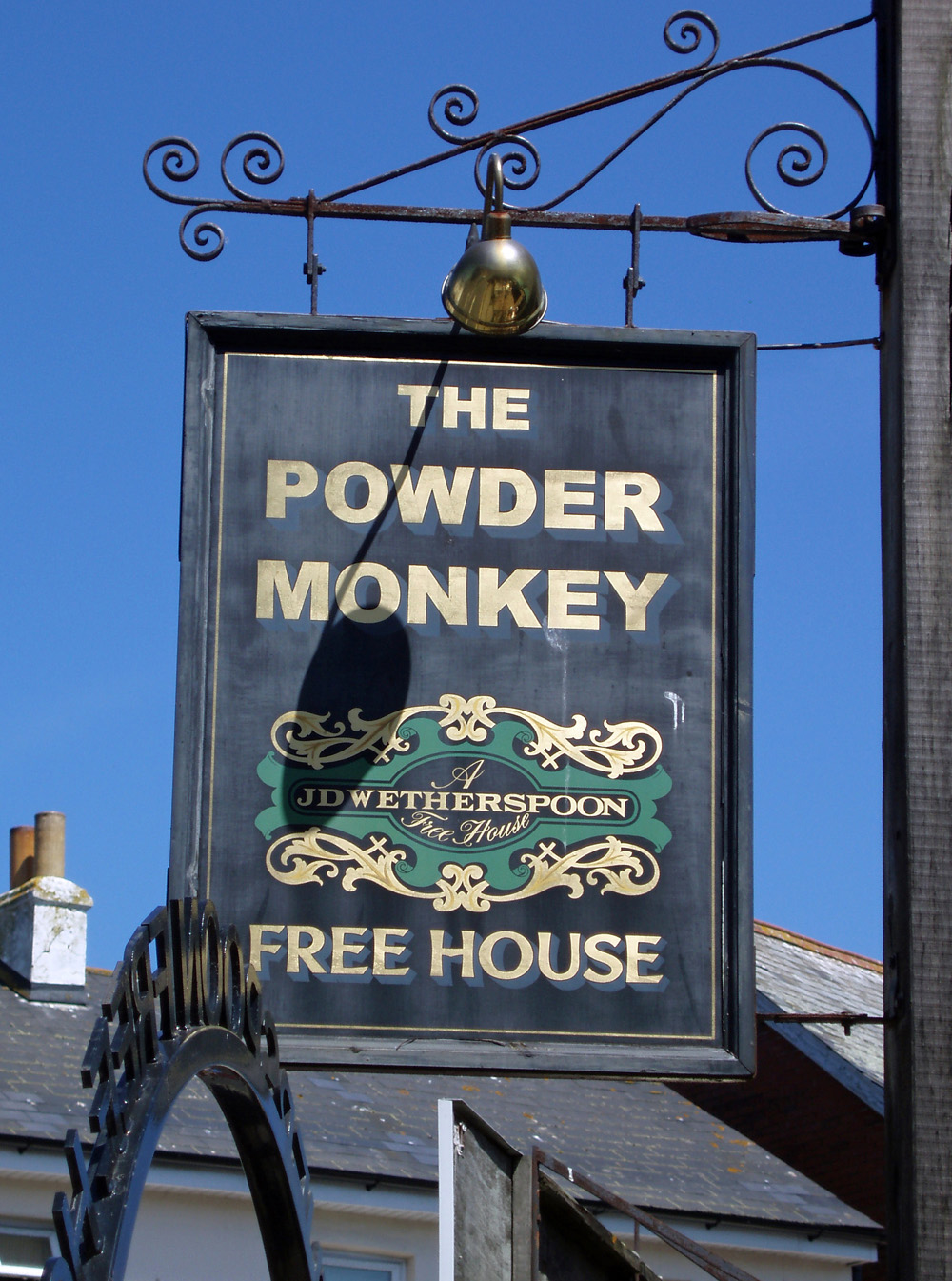 The new pub name commemorates Nancy Perriam who lived at Exmouth for many years and is buried at nearby Littleham (close to Nelson’s wife, Frances). Nancy accompanied her husband on board naval ships during the Napoleonic Wars and took part in several battles. During battles, women on board navy ships served unofficially, either helping the surgeon with the wounded, or as powder monkeys, carrying gunpowder cartridges from the powder magazine to the cannons.The pub sign is also a reminder that not all pubs are known by their original name, and the current name may be misleading.

All kinds of small items of ephemera give vivid glimpses of the time they were in circulation, so this is a plea not to discard anything! The examples below are a receipt for a poor rate payment in the parish of St Leonard’s in Exeter in 1895; the Queen’s Message to the nation on a Christmas card issued to Women’s Institute members in 1942 (she was the wife of King George VI, of course, better known after his death as the ‘Queen Mother’); an advert for a rag and bone man in south-east London from the 1950s (A.R.P. sheets are air-raid precaution sheets – corrugated steel sheets from the air-raid shelters that had been installed in people’s gardens); and an identity card from the years following the war. 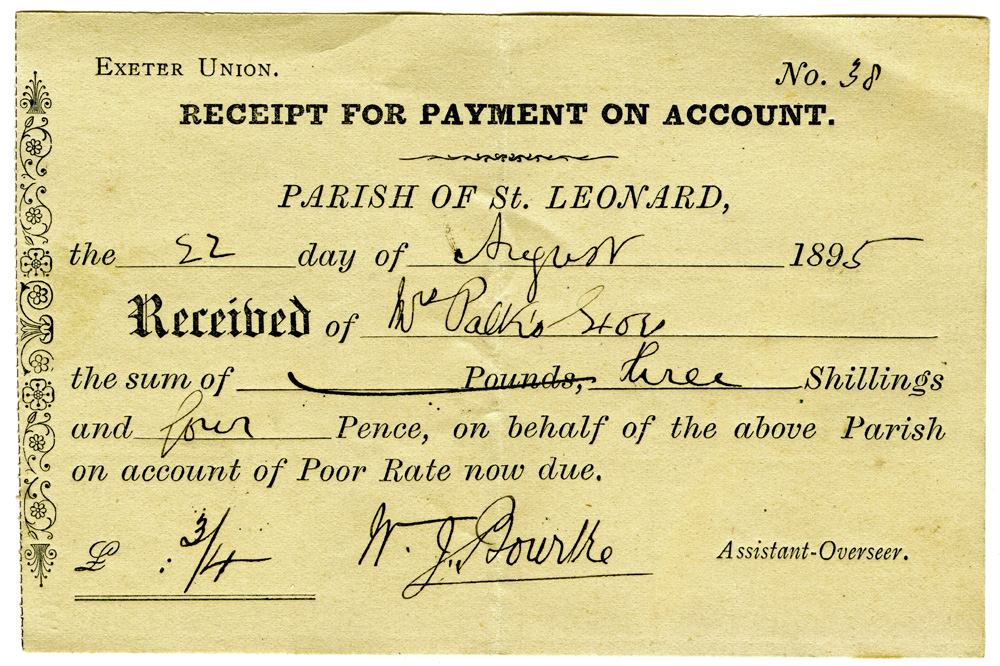 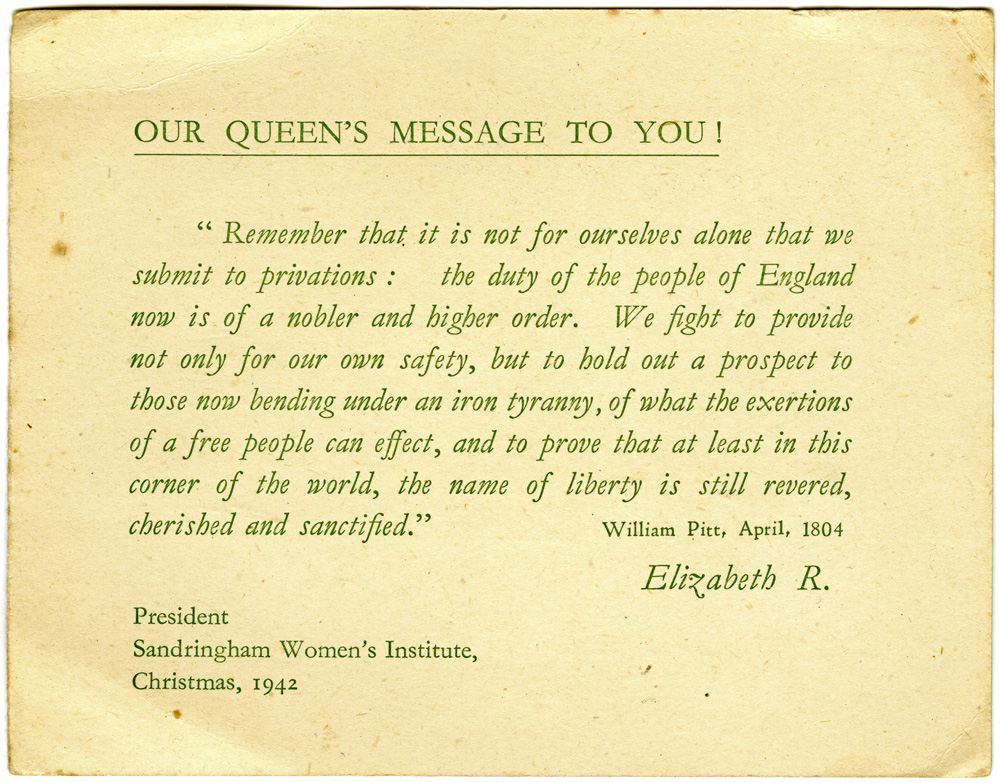 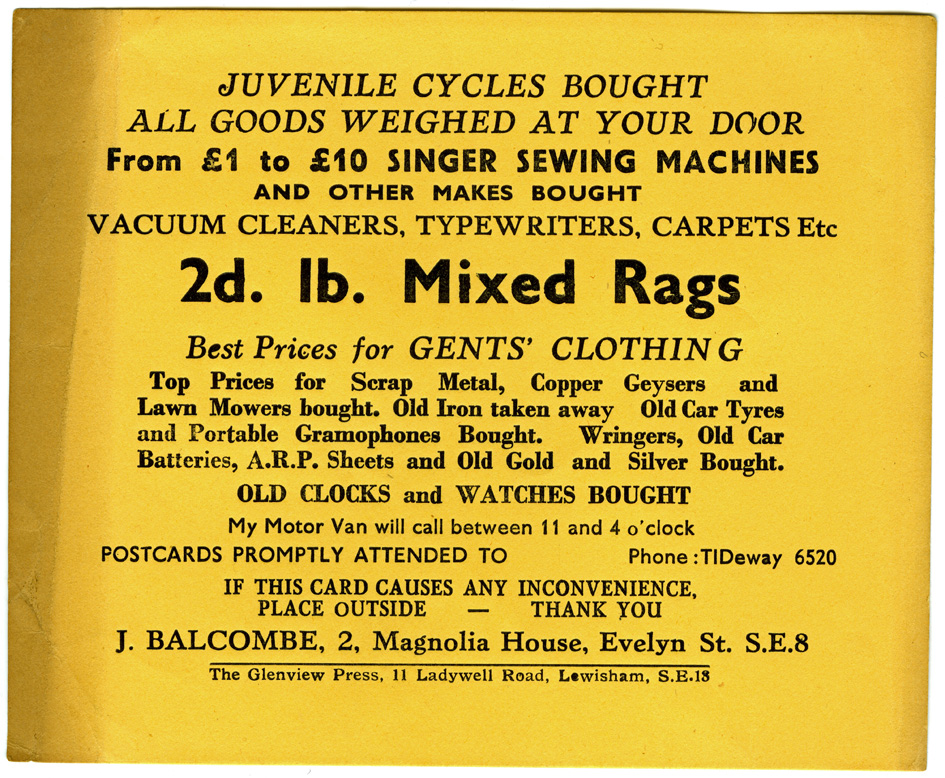 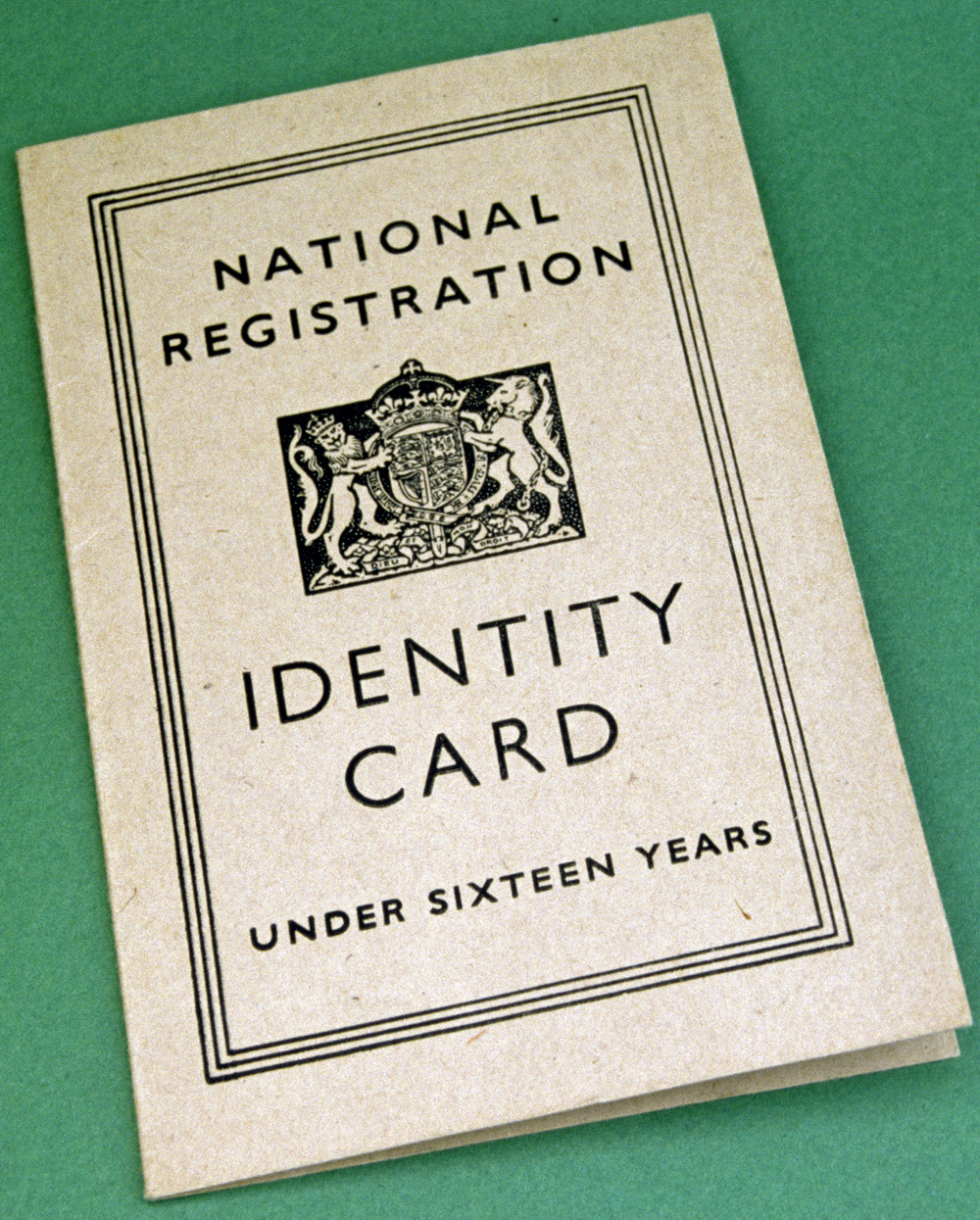 Newspapers are a great resource, and as was customary, the front page of this newspaper, The Morning Chronicle for Saturday 24th October 1807, was filled with notices and advertisements, offering all manner of goods and services, from tallow candles to secondhand carriages, India shawls, the latest books and ‘best large Newcastle coals’, as well as boxes in London theatres to let for a period of months. 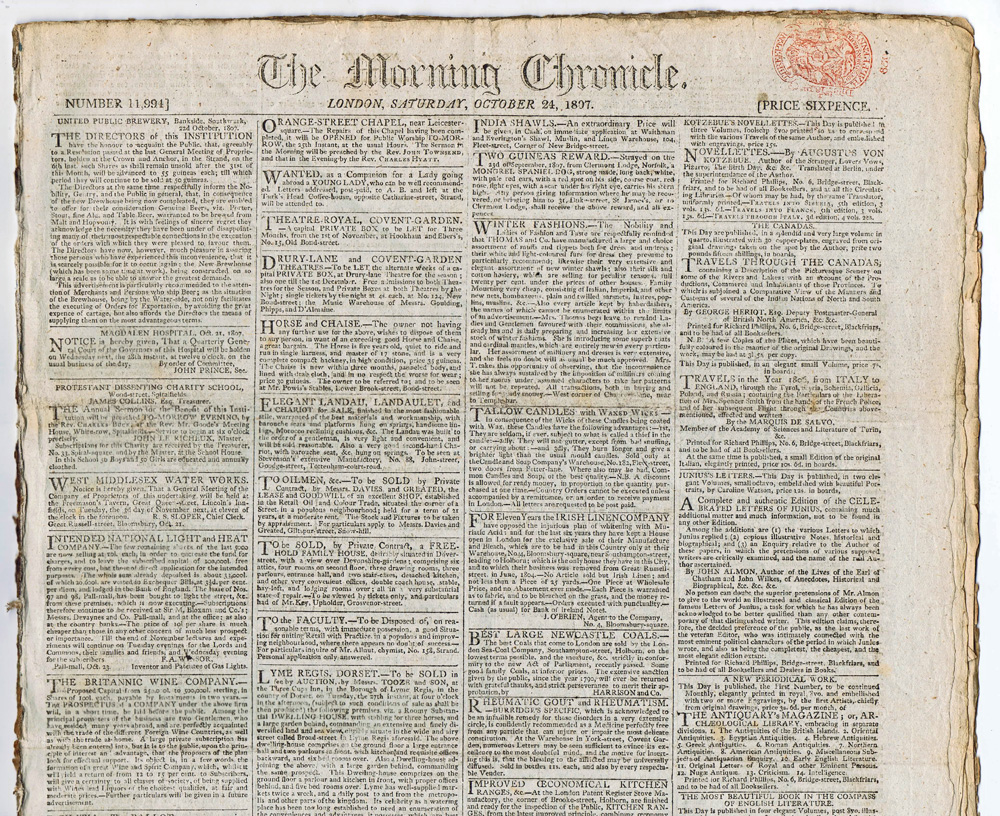 This advertisement is a reminder that spring is here, and many of us will be mowing the lawn again before too long. It was printed in a guidebook to the Great Eastern Railway in 1865 and extolled the wonders of a brand-new type of noiseless lawnmower. Lawnmowers were then hand-propelled, not driven by an engine, but with the entire neighbourhood mowing, it could be bedlam. One model with an 8-inch cutter was said to be ‘Easily worked by a Child’, while the 10-inch and 12-inch versions were available for ‘a Lady’. 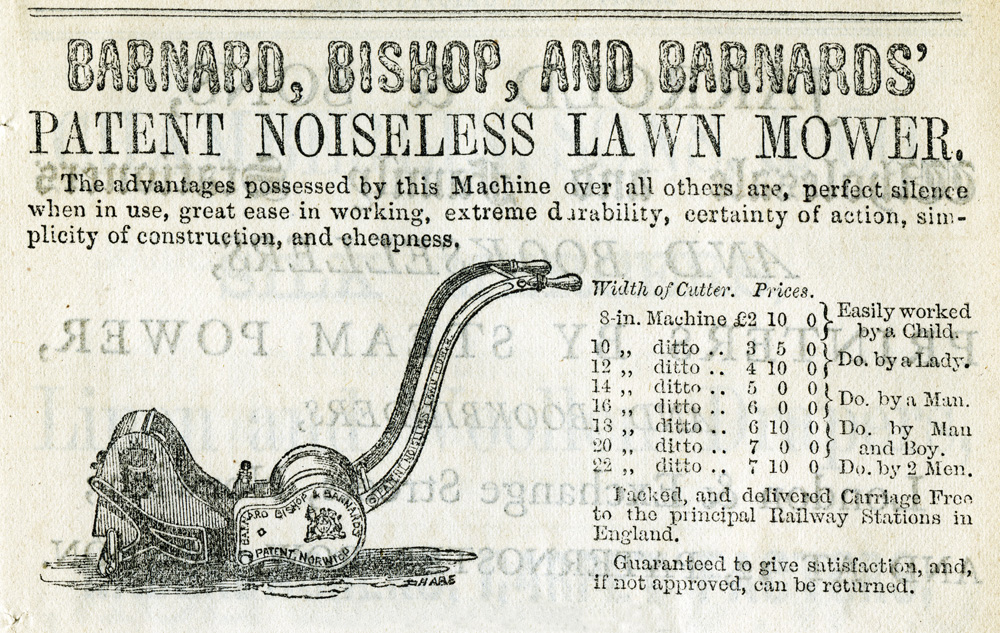 We are extremely pleased that our book Jack Tar (on life in Nelson’s navy) is now available as an unabridged audiobook (16 hours and 10 minutes in length), published by Hachette Audio and beautifully narrated by John Telfer. You can obtain it both in the UK and in the United States (and probably elsewhere as well), through the normal audiobook sources. The ISBN is 9781405550253

More on the Trafalgar Audiobook

More good news for the audiobook of Trafalgar, also narrated by John Telfer, because it is now available in the United States, published there by Tantor under the title Nelson’s Trafalgar, which matches the title of the book in the US. You can obtain it through the normal audiobook sources, including Audible on Amazon.com. You can also find more details on Tantor’s own website.

We hope that you are all coping with the restrictions imposed on us by this pandemic and that you perhaps have been taking the opportunity to read lots more than normal. Two or three of our own books are either waiting to be reprinted or for Amazon to unpack its boxes. There are other retailers, of course, though it has surely been a grievous error in the UK to keep physical bookstores closed, when they would have provided much comfort. Meanwhile, several of our books are available as e-books, and Trafalgar, Jack Tar and Gibraltar are in audiobook form (and The War for All the Oceans is available in the US on CD).

Sam Benady on Gibraltar runs a wonderful website, and in a recent post, he has featured books on the Great Siege, including our own, which you can see here.

In other posts, he ranges far and wide, from a piece on Cookery Books and Ophthamology (there is a connection!), to a whole series of pieces on epidemics and a beautiful (true) tale called ‘Sarita Wants to see the World’ (dated May 23rd). Take a look. Each window reveals a fascinating story.

Our newsletter has taken a slightly different approach on this occasion, in order to reduce the amount of time taken in compiling it, as we are trying to finish our next book by the fast-approaching deadline. The book focuses on birds and history, and we will give more details in the next newsletter, when it should all have been submitted to our publisher.

Thank you for reading this occasional newsletter. The next one will possibly be in July or August, and we hope for better times by then. Keep safe and well.