Skip to content
You are here: Adkins History > Handbook to Life in Ancient Greece

This handbook was published in hardback in the US in 1997 by Facts On File and in the UK by Sutton Publishing (but under the title Ancient Greece. A Handbook). It was issued in paperback (at a remarkably low price) in 1998 by Oxford University Press, although only available in the US. An updated and expanded version has been published in hardback by Facts On File, 514 pages long with over 200 illustrations. This reference book provides comprehensive access to over three millennia of ancient Greek history and archaeology, from the beginning of the Minoan civilisation to the capture of the Greek states by the Romans in 30 BC. Illustrated throughout with our own drawings and photographs (providing us with a good excuse to enjoy the sunshine and sites of Greece, Cyprus and Turkey), it has ten thematically arranged chapters, an extensive bibliography within each chapter, and a comprehensive index.

Selected by the American Library Association as “an outstanding reference source”.

Although Greece was divided into numerous regions and states, the same language was spoken, distinguishing Greeks from barbarians (barbaroi, a word they applied to all non-Greek-speaking people, meaning all those who spoke in an inarticulate tongue, especially the Persians in the 5th century BC). Greeks were therefore monoglots, although there were numerous dialects, and the Greeks themselves mention four ethnic groups of Athenians, Ionians, Dorians and Aeolians. There was no break between ancient and modern Greek, and so it is the longest-attested European language, a language that has changed over time….

The revised edition of the Handbook to Life in Ancient Greece is published in Russian in hardcover by the Moscow publisher Veche.

The book has been translated into Chinese and has been published in paperback in China by The Commercial Press, with 839 pages. 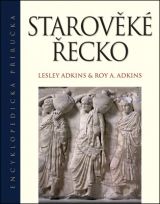 Reviews include ‘fascinating and easy to follow book’ (History for All).