Skip to content
You are here: Adkins History > Our Newsletters > Newsletter 49

Welcome to the June 2017 issue of our occasional newsletters.

This year, 2017, is the bicentenary of Jane Austen’s death in July 1817. It is also the bicentenary of her novels Northanger Abbey and Persuasion, which were published posthumously in December 1817 –  some 42 years after she was born.

Jane Austen was born in the Hampshire village of Steventon on 16th December 1775, and she lived in various places, such as Southampton and Steventon in Hampshire and Bath in Somerset. When she became seriously ill in April 1817, a physician from Winchester in Hampshire was consulted after the local doctor admitted defeat. On 24th May she travelled from her home at nearby Chawton to Winchester and took lodgings in a house in College Street, but her new physician was also unable to alleviate her symptoms. She died at her lodgings on 18th July 1817 and was buried in Winchester Cathedral six days later. The illness that caused her death is still debated.

At first, her grave in the cathedral was rather inconspicuous. The memorial slab in the floor of the north aisle has an inscription that describes her as the ‘youngest daughter of the late Revd George Austen, formerly Rector of Steventon’, and the only hint of her talent is the acknowledgement of the ‘extraordinary endowments of her mind’. Her career as a novelist is not mentioned. It was only later, as her novels achieved greater fame, that her nephew put a brass memorial on the wall of the cathedral, close to her grave. That was in 1870, but three decades later, in 1900, her work was so well known and loved that a public subscription was raised to pay for a memorial window. 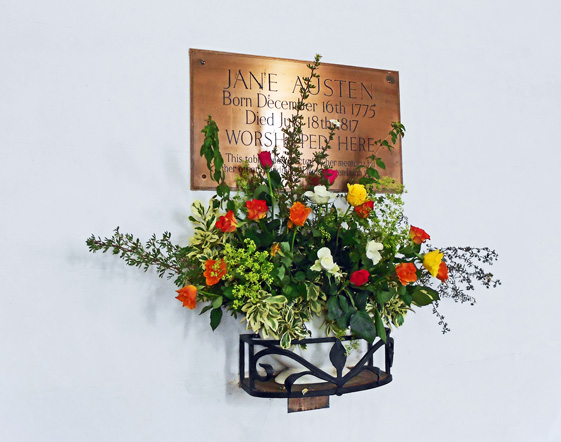 A memorial to Jane Austen in Steventon Church, installed in 1936

Northanger Abbey is regarded as one of Jane Austen’s earlier novels, because she started it in 1798 – with the title Susan. In 1803 her brother Henry sold it to a publisher, and so she must have felt huge disappointment when they sat on the manuscript and did nothing with it. In 1816 Henry bought it back from the publisher, but by then Jane was working on another novel called The Elliots, which would become Persuasion.

When Northanger Abbey was finally published in 1817, it carried an ‘Advertisement by the Authoress’, in which it was stated that the novel was ‘finished in the year 1803’ but ‘the public are entreated to bear in mind that thirteen years have passed since it was finished, many more since it was begun, and that during that period, places, manners, books and opinions have undergone considerable changes’. Readers today would perhaps not notice much difference between a novel of 1803 and another of 1817, but at the time changes in society were all too apparent. Apart from their merits as novels, the books of Jane Austen therefore have a historical value, precisely because she was writing contemporary books and not historical fiction. The ‘Advertisement’ shows the care that she took to ensure her work was immediately relevant to her readers.

Northanger Abbey was a satire on the romantic gothic novels that had become fashionable at the end of the 18th century, but Persuasion was quite different both in its content and publication history. Begun in 1815, that novel was the last one to be completed by Jane Austen before her death. It is also one of her two ‘naval’ novels, the other being Mansfield Park. In Persuasion, a naval officer, Captain Frederick Wentworth, is a central figure, and the heroine, Anne Elliot, eventually marries him. The main themes of Persuasion are status and prize-money.

We were very pleased to be able to attend the summer event of the Kent branch of the Jane Austen Society. On a glorious summer day, we were entertained in the morning by two superb talks. The Austen family has many Kentish connections, and Heather Dyke gave a wonderful account of her research into the links between Court Lodge (a Georgian manor house), her family (the Morlands) who have lived there since 1733 and the Austens. The next talk was by Martin Renshaw, who is a singer, organist and much more. He not only talked about Jane Austen, John Marsh and the piano, but also sang and played the piano and organ – against the beautiful sound of bells from the nearby church. This was a real treat. After a picnic lunch on the terrace, overlooking the gardens (see the picture below), it was our turn to do a talk called ‘All at Sea in the Time of the Austens’, showing how the Royal Navy was so important to Jane Austen, how it was woven into Mansfield Park and Persuasion, and what life was like in the navy. 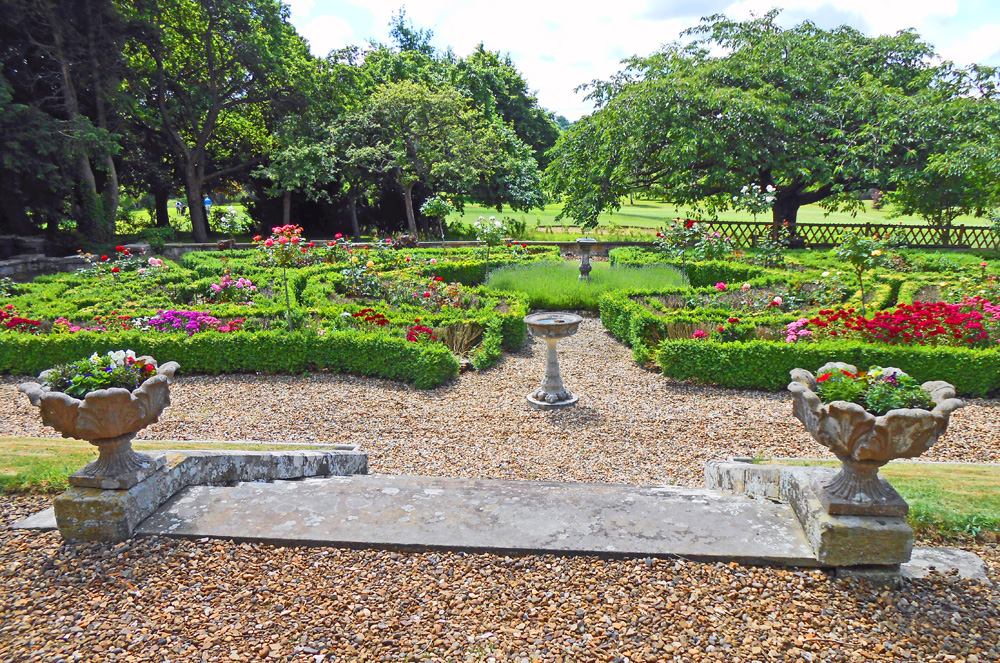 Although she did not travel very much outside southern England and never abroad, there are now memorials to Jane Austen in almost every place she visited. The city of Bath, where she lived from 1801 to 1806, has strong associations and features in both Northanger Abbey and Persuasion. It now boasts the Jane Austen Centre and an annual Jane Austen Festival among its attractions. 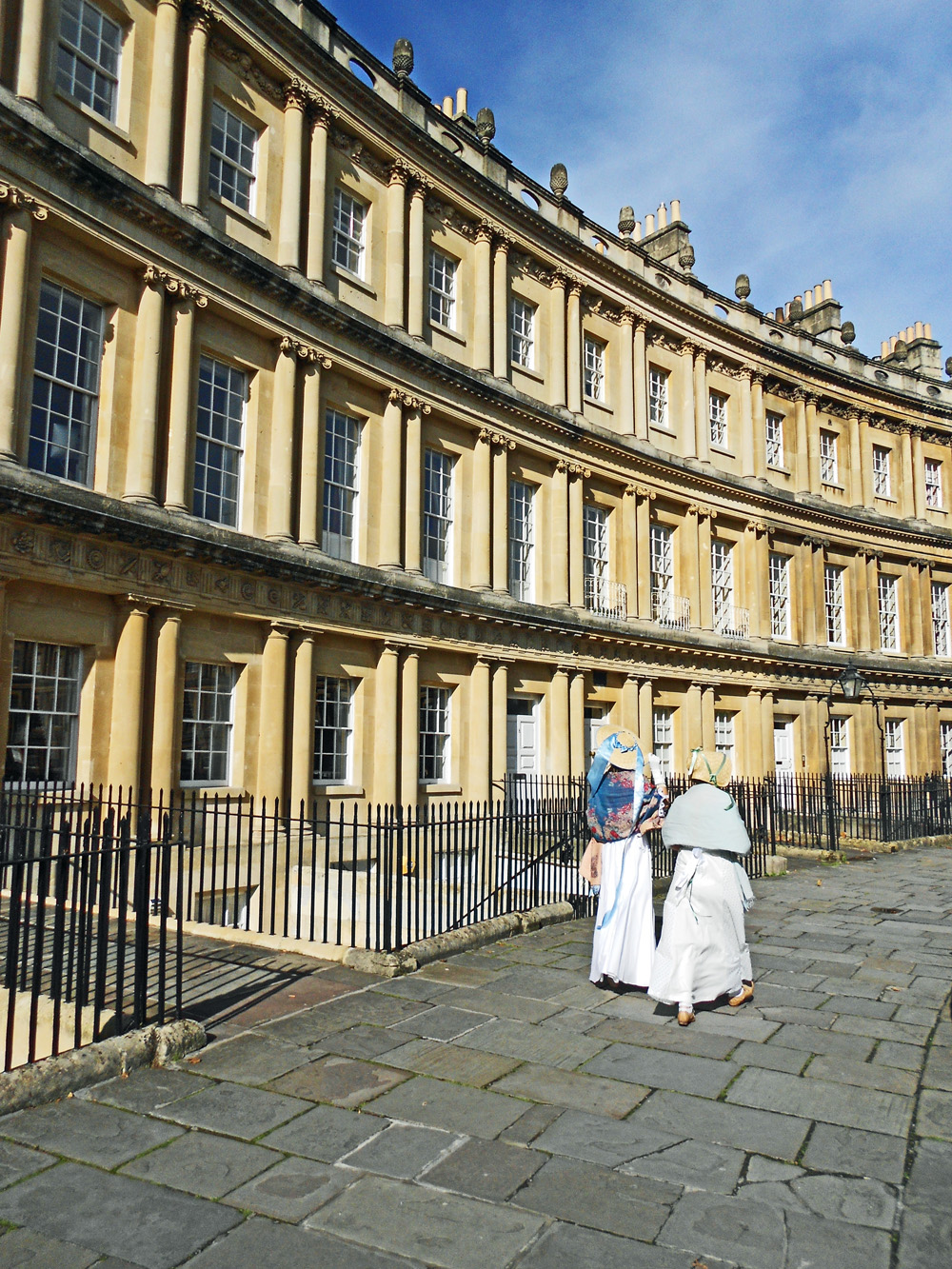 The Georgian City of Bath

Despite the many memorials and places associated with her, Jane Austen’s real legacy is her novels, which display her remarkable talent for storytelling and insight into human nature. In weaving the threads of her narratives, she used accurate observations of everyday life at that time – as well as being excellent novels, they are a chronicle of Georgian England. For further information about life in England at that time, see our book Eavesdropping on Jane Austen’s England (or Jane Austen’s England in north America). 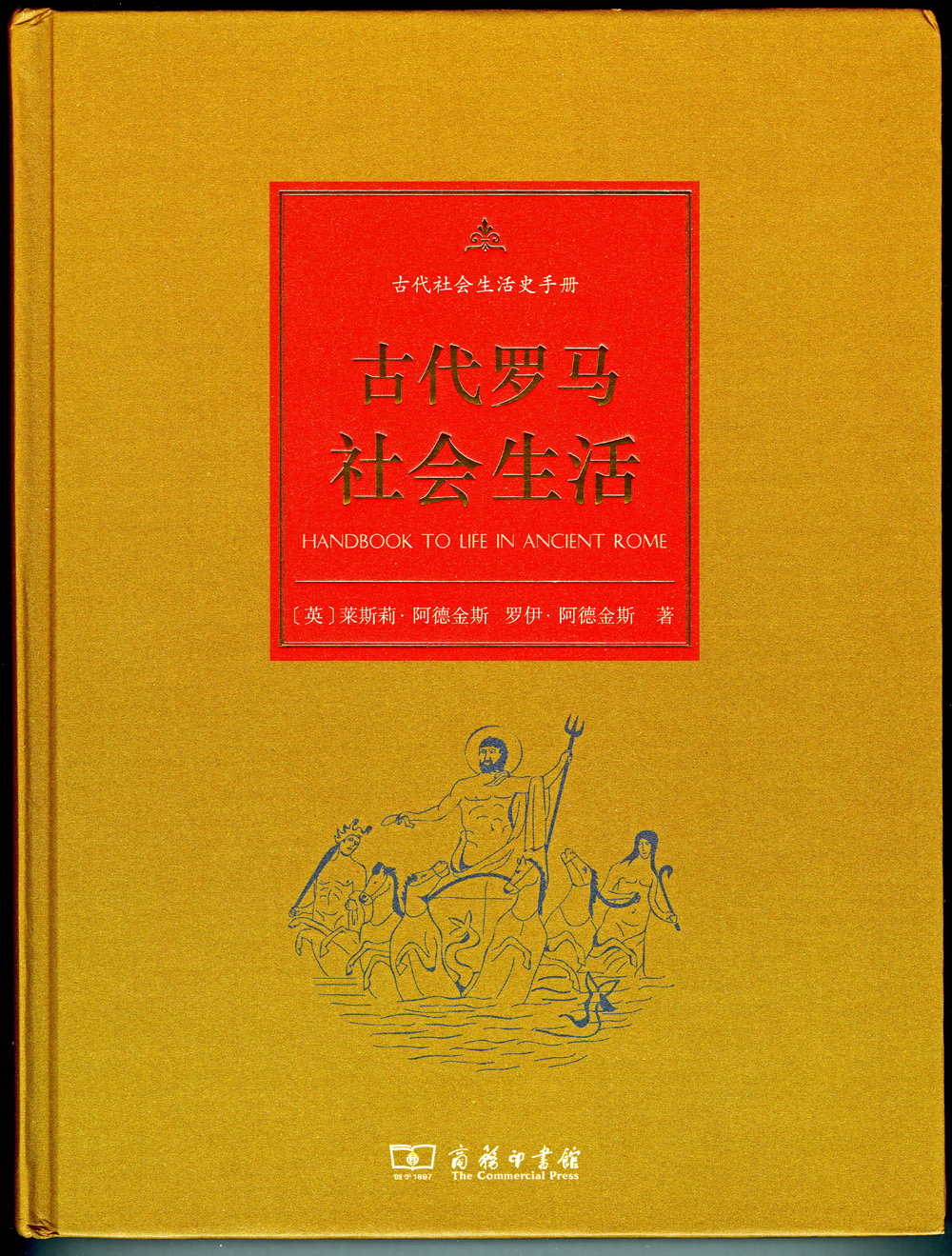 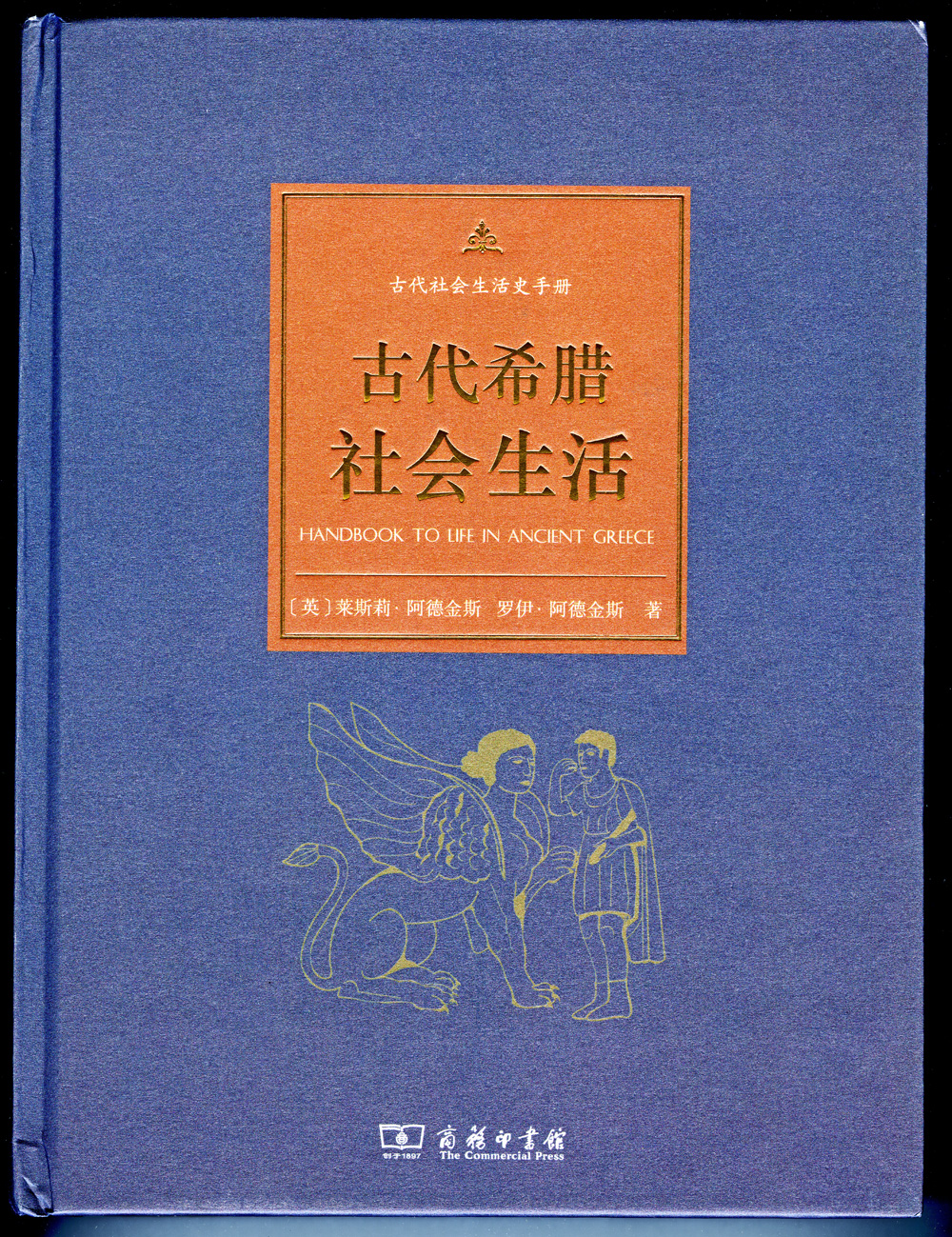 From hand to steam

Before the mid-15th century, everything was written by hand, including multiple copies of the same work, which meant plenty of opportunities for scribal errors. Then the invention of printing revolutionised book production, because it was quicker, easier and cheaper to produce multiple copies with exactly the same text. Even though printing presses continued to develop, with more efficient designs, they were still powered by hand until the introduction of steam-powered presses in the early 19th century. This revolution increased the number and availability of books and allowed their cost to decrease.

Manually operated printing presses continued in use for specific tasks, but by the late 19th century steam power was dominant. Printers often combined printing services with selling books and stationery, and in an advertisement of 1865, Nall’s Steam Printing Works at Norwich in Norfolk offered ‘Printing by steam power with speed & economy’. The same company also sold books and stationery and ran a subscription library.

For printing a book by steam, each page was made up with individual metal letters (called ‘type’) set into a frame. This ‘typesetting’ was done by compositors who built up each page manually, letter by letter. The frames of letters were then used in a printing machine to make the required number of copies of each page, which were collated and passed to the bookbinder, who produced the finished book. The printing process underwent various refinements, the most significant being the replacement of steam power with electric power. The next revolution came with computer typesetting, which began in the 1980s and is now the method used for most types of printing.

At first, the author wrote the manuscript of the book – literally! – and for those wealthy enough to afford the services of a scribe, copies might be made. Otherwise, it was almost a matter of luck if a book was copied (and equally a matter of luck if any copy survived to the present day). With the invention of printing, the author gave their precious handwritten manuscript to the printer (who was often the publisher as well) and hoped for a good outcome. Later on, authors were able to generate their text on a typewriter, maybe even using carbon paper to create a duplicate copy. Gradually, refinements in the process were adopted by the publisher to improve the quality and accuracy of the text, such as editing, copy-editing and proof-reading, but the final result still relied on the printer’s skill. 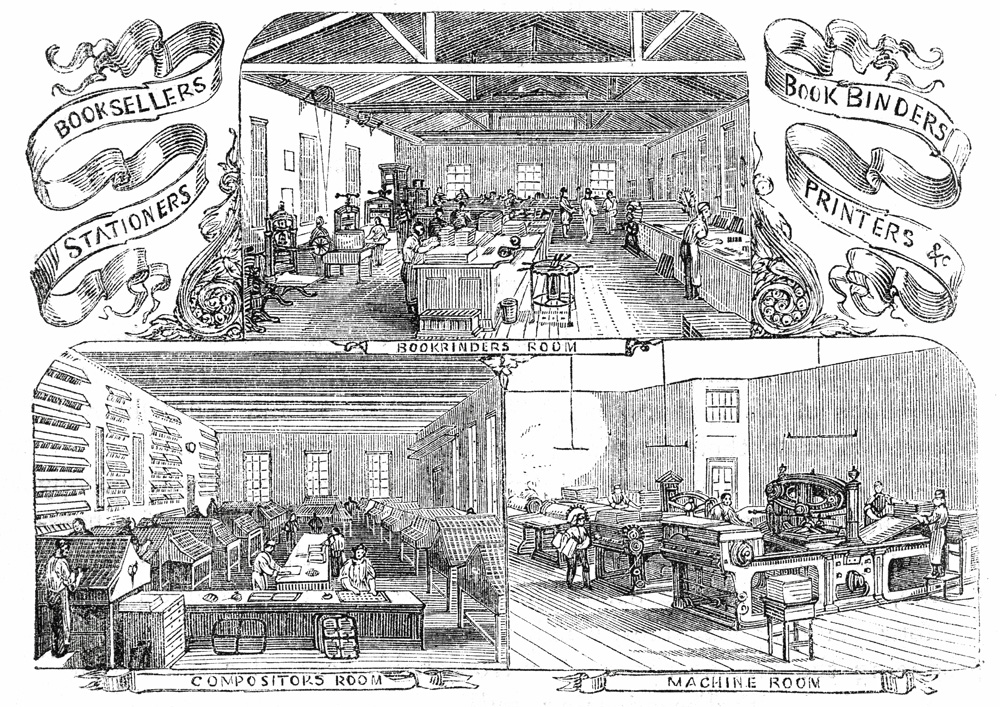 This situation changed radically when computers were introduced. It soon became possible to produce a finished text, ready for printing, on computer, and as the price of computers fell, this could be done on personal computers at home. The era of ‘desktop publishing’ had arrived. An author can now construct a whole book and deliver it in electronic form to a company for publication – as an e-book, physical book or both.

Progress of our next book

While it is relatively straightforward to write, compile and design a fiction book entirely on a home computer, non-fiction books are more complex because of the additional material like endnotes, bibliographies, maps, plates and index. Since we want the best outcome for our non-fiction books, we still publish through a traditional publishing house, but we do find it interesting to compare our experiences with the evolving technology used by our self-published friends.

We submitted the manuscript of Gibraltar: The Greatest Siege in British History at the end of February (on time!), and it is now going through the processes that transform a manuscript into a book for sale. The publication date was set before we finished writing, and normally it takes a year to publish a book, but everything is speeded up for this one. The book jacket was done ages ago, the cartographer has finished the maps, the copy-editing is complete, and the illustrations are being prepared for the plate sections. The typesetter has just produced page proofs, which we are about to check. A proofreader will also check them, and the index will also be compiled now. After a few inevitable corrections, everything will be ready for printing the finished books in time for review copies to be sent out and for getting books into bookstores for publication day – 7th September 2017.

The first attempts at manned hot-air balloon flights took place not long after the ending of the Great Siege of Gibraltar. The Montgolfier brothers (Joseph Michel and Jacques Étienne), established a tradition that persisted with the first spaceflights – sending up animals in the initial experimental flights. In September 1783, a cock, duck and sheep were attached to a hot-air balloon and launched from the Palace of Versailles, near Paris. The animals travelled 2 miles in 8 minutes before landing safely. After that, the way was open for larger balloons carrying people, and the age of flight began. All kinds of enthusiasts started to experiment with both hydrogen and hot-air balloons, and ascents became popular spectacles.

Letitia Sage, George Biggin and Vincenzo Lunardi
(waving his hat)in the balloon before the ascent in June 1785

The original plan had been for Vincenzo Lunardi, George Biggin and Mrs Sage to make the balloon flight on 29 June 1785, but in the event only Mrs Sage and George Biggin took to the air, as the Northampton Mercury reported:

‘Yesterday [Wednesday 29 June 1785], about a quarter past one o’clock, Mr. Lunardi’s Balloon was launched from Mr Arnold’s Rotunda in St. George’s Fields. The Balloon not being able to carry up three Persons, as intended, and Mr. Biggin having been twice disappointed before, Mr. Lunardi gave the Preference to Mr. Biggin, who was accompanied by Mrs. Sage. It took its course to the westward, and made a very beautiful appearance over Westminster Bridge, and after it had been launched about a quarter of an hour, it altered its course, and was seen very plain in Fleet-Street, Newgate-Street, Holborn &c. and almost all over London. The direction then was north-west. The aerial travellers alighted in perfect safety a few minutes after three o’clock, in Harrow Field, after a very agreeable journey. They were received by the young gentlemen and neighbours with the utmost politeness and friendly attention.’